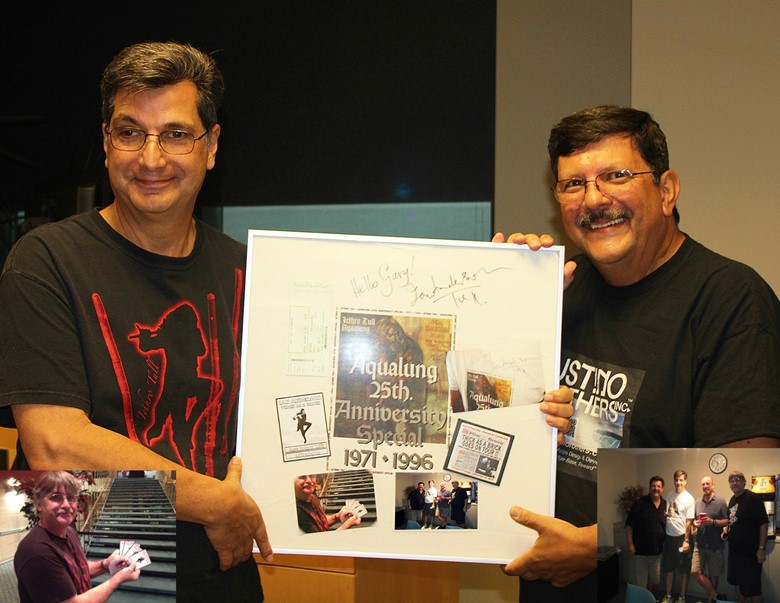 Caption: May 2014 – Fustino Brother’s (Gary left, Russ right) shown supporting plaque from the September 2012 Ian Anderson’s Jethro Tull tour at Ruth Eckerd Hall, Clearwater FL with Rich (holding passes) celebrating apps endorsement. The three Fustino Brothers indicated- “It was an honor to be back stage for the meet ‘n’ greet (Anderson holding cup), and that was the spark.”

The Brothers have a deep passion and appreciation for Ian Anderson’s music, performances and genius. This includes the Jethro Tull band music and especially Ian Anderson’s solo works with approximately 50 CDs published spanning 6 decades. Also, Ian Anderson released a brand new CD in April 2014, Homo Erraticus. Ian’s band has just started a two year tour performing the new CD and the best of Jethro Tull. Get the free FBI App, to see the tour dates near you along with videos, photos and music information at your fingertips. Go to: http://www.windowsphone.com/en-us/store/app/tull-tribute/4b28de49-ca75-4b8f-9a95-403c9db5bad6

Russ Fustino (Russ’ Toolshed Network – New Port Richey FL) FBI’s President and CEO, a Microsoft MVP in client development, says, “We would love nothing more than to have Jethro Tull, in the pocket of fans worldwide, young and old. Tull has provided much entertainment in our family and this is our way of saying Thank You.”

Rich Fustino, FBI’s Chief Audio Engineer, founder of Steele Productions, teacher of 47+ years at Matt’s Music (Tonawanda NY) and Crossroads Music Center (Williamsville NY) says, “I was turned on to Tull listening to their 3rd album Benefit. I could not stop playing it, and then turned my brothers on to it. We all attended the Aqualung Tour as our first concert together. I am so happy to help ‘benefit’ Tull fans worldwide.”

Gary Fustino, FBI’s VP, an ambassador for both the Tampa Bay’s St. Pete Chamber and Midstate Chamber of Connecticut, eServices Director for Bluffs Business Association, dba: Design For Communication and founder of InBusinessLinks Network – says “The key to our success is to generate apps in the shortest period of time while yielding high quality standards. Tull’s fabulous album art and music have been a creative inspiration.”

In making this agreement happen, the Fustino Brothers were assisted by the outstanding efforts of their family lawyer Houston Putnam Lowry, F.C.I. ARB of Brown & Welsh. P.C. in CT. Houston was successful in guiding them through international legalize necessary to bridge the pond between America and Great Britian.

Fustino Brothers, Inc is an app generation company. FBI apps are entertaining educational apps for the Windows Phone Marketplace and Windows 8 Store. Additional platforms include Android and Apple iOS. FBI has a unique app engine architecture, creating data driven apps. FBI utilizes this engine by pulling in designer fonts, graphics, music, and video as well as instrumentation and globalization. FBI is only just starting to plan an experience of a lifetime!

“Like” Social Media Part 2, as Easy as Using “Word”

by Russ and Gary Fustino

The Online Meeting/Call Originates from Design For Communication at 12:01PM

(with Round Table Introductions) to:

At Your Facility (Computer’s Desktop/Tablet), or Private/Remote Location with Just a Smartphone 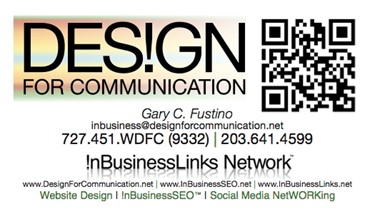 1. On Your Computer- It’s Recommended to Use a Headset.

- Join-In 3-5 minutes before meeting, Over the Internet, with your computer / laptop / tablet at-

- If you don’t already have the “Start Meeting” free software-

- A dialog box will come up and ask permission to download – please click/tap Yes.

- The system will guide you through the process to participate in the online meeting.

- First, the Fustino Brothers, Inc. dashboard with show on screen.

- Test your speaker/mike. If headset doesn’t work, or if connection is lost – try “Rejoin”.

- Click/Tap on the green microphone symbol. When the symbol turns red you are live.

Or, Conference Call Instructions to Join-In:

1. For the Phone- Take Your Call in a Quite Location-

- Join-In using a land line / mobile phone (no computer needed for this option).

- When prompted enter access code followed by the “pound” key.