It’s live!  One of the most incredible moments of my life! See a great video produced by Microsoft about Fustino Brothers’  endorsed app, Jethro Tull. Most importantly,  see footage of your truly, Russ Fustino,  showing the app to rock legend, Grammy award winner, Ian Anderson in person!

It’s about a three minute clip and in the first minute you will see background and some cool 3 brother fan shots. In the middle, I go into how I used App Studio to build the app and it ends with the best part of showing Ian Anderson the app. It was filmed in Lynn Mass on Nov 1, 2014 at a concert where he performed the Best of Jethro Tull and his new CD Homo Erraticus . Check out his comment about Jimmy Page! Also, check out the surface pro in the closing credits, firing up the Jethro Tull app. So cool! The video team that Microsoft hired did an incredible job. Enjoy!

The Jethro Tull is endorsed and published to Windows Store and Windows Phone Store.

Here is the link to the channel9 video itself: 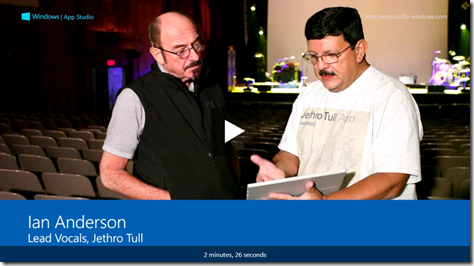