Another chapter begins for me in this great developer community we have in our software industry! I am happy to announce I have started at www.raygun.io as the Raygun Community Evangelist! Raygun has the hottest error tracking and affected user software in our industry. Raygun continues to see significant growth month over month in downloads and installations…  Raygun supports more app platforms and more integration notification systems than anyone.  See lists below.

Are you tired figuring out null reference exceptions? Is it from C# , IL (Intermediate Language) or the machine code by the JIT compiler? This can be tricky indeed,..what exactly is null? Enter Raygun. For example, I had a WebException: Error: NameResolutionFailure in my Jethro Tull app during development, and the Raygun reporting pointed me directly to the http client request call that had failed. I forgot to put in a try / catch statement around that call and it was fixed pretty quick. 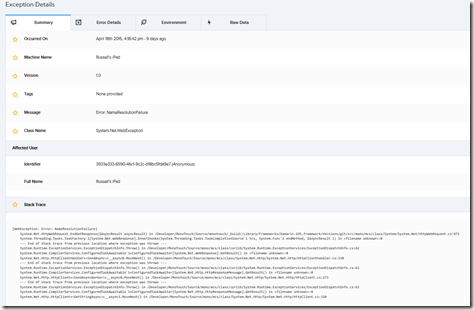 Also, Raygun’s backend infrastructure is second to none and is blazing fast, which is a huge benefit to developers during testing and development. It is great to have results to analyze in a matter of seconds on a consistent basis. Even better, is to get the results for production apps before your customers do and be proactive!

Message grouping an awesome feature of Raygun. What is message grouping? Let’s say you have a globalized web app and you have an error message from a browser in Germany and the same error in English. Even though textually different, they are grouped as effectively the same error! It makes your job easier. Start your free trial now at www.raygun.io .

The product continues to be enhanced with more enhancements planned. Check out  most recent Announcement on: Affected User Tracking – The Easy Way To Find Out Who, What, Why and When!

I am looking for speaking engagements, so let me know if you know of any user groups or events, who might  be interested in seeing this great set of tools. It’s all about taking your application quality to a higher level! Please contact me at rfustino@raygun.io .

Stay tuned to @RussFustino and @raygunio for more tweets about Raygun. Please like our Facebook page too !

Check out John-Daniel Trask interview on a recent episode of .NET Rocks .  Tune in for special offer, as a thanks just for listening! John-Daniel Trask is the Co-founder & CEO of Mindscape, creators of the popular Raygun error tracking software. John-Daniel is also a Microsoft ASP.NET MVP. I look forward to working with his energetic team and everyone at Raygun,They are a genuine and talented group!

We are expanding the US office based in the San Francisco Bay area and are hiring a sales, marketing and evangelism team over the next few months. The evangelism position is not geo specific. See details at: www.raygun.io/careers 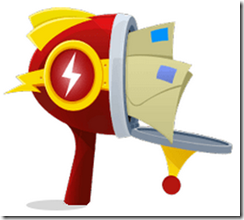 Get notified today! Use Raygun!

Kevin’s goal for 2014 is to figure out how to reduce/eliminate the “last-mile” syndrome when building a mobile apps…basically you get to the 90% mark and think you are ready to publish, but then spend 90% of the time churning on the last 10%. See a presentation on tips/tricks for reducing the churn… These two are really tied together.

SPECIAL THANKS to KForce for providing the food!